A letter from a high school teacher about what she experienced with her 90-year old mother:

Sadly, I couldn’t call you today because I only just returned from my mother’s home. She is now 90 years old and insists on living by herself, which is difficult to accept for us, her three children. I had at first planned to clean her home a bit, but she was fairly agitated, didn’t get dressed all day, and just sat in her bathrobe in front of the blaring TV. She said that she didn’t feel well, and her medication wasn’t working well. (She receives her medication from the friendly mobile care team staff.)

I tried to calm her down and organized her pill box since there was no plan set for the weekly medication schedule. It seemed to me that my mother wanted to reorganize her medication by herself, and she must have gotten lost in the process. She wouldn’t calm down, even though I assured her that we would fix the problem – she was more interested in blaming somebody for a mistake. I just wanted to solve the issue and move on. This was pretty difficult and really almost impossible.

I still had the Gefuehlsmonster® card set in my pocket from working with my students. I told her about it and wanted to show it to her, but she was not interested at all. Well, she became a bit more interested after I told her that my students smile when they look at the cards, so she relented. Initially, she said “I’m not interested in playing cards now!” but as I packed them up, as if by coincidence, I let my mother catch a glimpse of the little guy lounging in a hammock.

“Oh, show me that one – when I lie in bed, I always put my arms under the blanket, so I don’t get cold, but he seems really comfortable. He looks funny.” Mother laughs at the picture.

I showed her a few more cards. “No, this one doesn’t seem like anything to me… Nor this one… And I don’t have a tail like that, anyway!” We both chuckle over that sentence. My mom addressed neither the words nor the feelings that are encoded in each picture, but she did relate many of the cards to herself. Seeing nr. 23 , she promptly declared, “I haven’t felt like this in a long time!”

She was convinced that the figure in card nr. 22 (who seems pretty unhappy) has eaten too much food.

In response to nr. 6 (purple color, tired), she expressed relief that she almost never has any headaches.

Nr. 2 reminded her that she urgently has to visit the eye specialist, and apparently the depicted figure only has trouble with one eye (“arrogant”, uses a monocle). “He seems distant, probably because he also doesn’t want to go to the eye doctor.” And again we laugh as we haven’t in a long time.

When she saw the figure depicted in nr. 19 (in love), she stated that he is probably also thinking about the health of his heart.

She consistently compared the little monsters to her own day-to-day life and giggled with joy because nr. 14 (who seems stressed) ought to brush his teeth – he must have food stuck in there and can’t get it out. She tells me about “his dentures” and gives him proper advice. We laugh and laugh.

I offered to leave the cards with her. She refused, but liked the little figure in the hammock the best. “You know, you can bring him over again. I feel like that now.”

I’m relieved that I got my mother to think about something other than her medication. The laughter has relaxed her a bit, and that in turn put me in a much better mood as well. I am really excited about this new use that I found for the Gefuehlsmonster® cards!

PS: If you want, feel free to forward my letter to the Monsters’ mom – it might make her happy!”

Yes: the “Monsters’ mom” was very happy about this story, and she thanks Gregor Mieder from Denver for translating it from German to English! 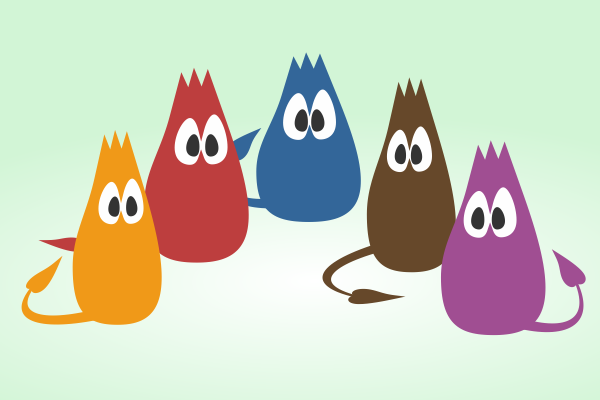